The Dallas-Ft. Worth International Airport referred to as DFW, is the main airport serving both the cities of Dallas and Fort Worth, Texas. The airport is located between Dallas and Fort Worth, making it easy to get to from both cities. While not the only airport serving the area, Dallas Love being the other, DFW is the much busier airport, with many more destinations and options for flights. The airport has its roots in development plans from as early as the 1920s, however, Dallas and Fort Worth both wanted individual airports, and did not cooperate to build one airport until mandated by the federal government for funding reasons. Construction of DFW began in 1969 and the airport opened in 1973, with much fanfare, including a visit by the infamous Concorde supersonic airliner.

Today, Dallas-Ft. Worth International is a thriving airport and the home to American Airlines. The airport features 5 terminals, all connected by train service. DFW is the world’s sixth busiest airport in terms of passengers moved, and is the fourth busiest airport in the United States, behind only Atlanta, Chicago’s O’Hare, and Los Angeles. Designed with the idea that the shortest possible distance should be between parking and boarding an aircraft, the airport features terminals that are circular in nature, allowing for that design to be effective. While most of the airport is used for operations by American Airlines, many of the major airlines serve the airport. 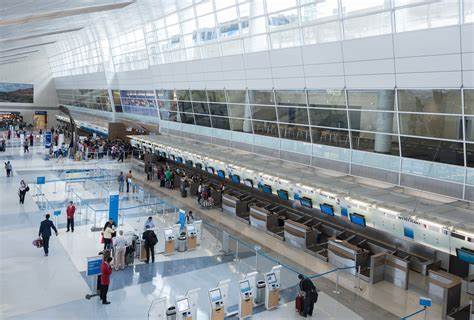 Terminal A (Gates A2-A39) is utilized only by American Airlines to operate domestic flights across the country. Terminal B (Gates B2-B39) is used by United Airlines and American Eagle, an American Airlines affiliate which operates smaller aircraft to many small cities across the country. Terminal C (Gates C2-C39) is also used only by American Airlines to domestic destinations. Terminal D (Gates D6-D40), also known as the International Terminal, is the newest of the five terminals at DFW, built-in 2005. Used by all airlines operating to international destinations, the terminal is home to nine airlines, operating to 36 destinations. Located above the terminal is the newly constructed Hyatt hotel. The terminal is also home to many upscale restaurants, including a Starbucks. Terminal E (Gates E2-E38) is home to all other airlines serving the Dallas-Ft. Worth International Airport, serving over 100 destinations domestically.

Each terminal is set up similarly, with check-in and baggage facilities contained in each terminal. Security is just outside of the gates area, with numerous security checkpoints available for entry into secure areas. Just outside of each terminal are bus stops for transportation to long term parking, as well as rental car facilities that offer you services from Palma airport to Pollensa. Short term parking lots are located in the empty space of each terminal, allowing for very quick access to the terminal for business travelers and for pickup of passengers.

The airport is also home to a very interesting taxiway, in which aircraft taxi across a bridge, over a roadway. This is a unique feature that was made to accommodate the addition of runways at the airport, to cope with the volume. DFW is also home to large cargo operations, with many cargo airlines flying to Europe, Asia, and South America. Overall, travel in and out of the Dallas area is very convenient when utilizing the Dallas-Ft. Worth International Airport.

What Are The Reasons Behind The Extreme Use Of Testosterone Boosters?

Testosterone boosters have become an essential element for males these days. This is because of the less testosterone in their body, which results in poor-quality life, which leads to so many diseases. Talking about the benefits or the reasons for which people are taking it more is that it enhance so many functions of our […]

Plumbing is the most trending business that is widely opted by people all over the world. This business involves a considerable amount of profits if you are doing it at your own level. If you are the owner of the plumbing business, then it gives you freedom regarding giving the shapes to the furniture as […]