HIV or Human Immunodeficiency Virus is a viral contagion that is caused by a type of retrovirus. Firstly it was observed in Pneumonia patients in 1981, with some rare skin tumor symptoms, Kaposi’s Sarcomas. Later reduction in CD4 cells was also noticed along with low immunity. These CD4 cells or T cells are the key element of the Immune System that helps body fighting infections.
HIV is an epidemic that affects men faster than women. This infection is transferred through body fluids like semen, breast milk, vaginal fluid etc. Often use of infected needles, blood and organ transplant trigger the disease in the recipient. It’s a little different from AIDS, Aids is an advanced stage of HIV infection when most of the T-helper cells are destroyed by HIV. HIV symptoms in men are not detectable at an early stage and usually, after a long period of time, they begin to appear.

Early Symptoms of HIV include an extended stay of mild illness or infections, often cold and flu takes longer time and overcomes the body, leaving it weak and tired.

In phase one, no HIV symptoms are evident, actually early symptoms of HIV are silent or indistinct. After transmission HIV virus takes at least a period of three months to be distinct and the antibodies are started appearing. Just after probability of transfer, it is not possible to identify HIV symptoms in men.

In the next phase, Virus starts to destroy the white blood cells, due to which body loses its immune system and the patient start to feel weakness and fatigue. Some early symptoms start to appear on this level that are a weakness, fatigue, weight loss, night sweats, cold and cough, and these slight illnesses become life-threatening in HIV positive people.

The last phase acts as a severe stage of infection. The body has lost the immune system entirely and becomes incapable to fight any type of infection. Often the patient shows symptoms through skin tumors etc. The virus of HIV and AIDS does not kill the patients, there are other infections and diseases that slay the victim.
HIV symptoms in men and women may differ, and often they are identical in both. Other early common symptoms are Headache, long-lasting Fever, Loss of hunger and weight, Nausea, Tiredness, swelling in lymph nodes, Sore throat, chronic muscle and joint pain, Enlarged spleen and liver etc. HIV symptoms in women can influence their babies and disease can also be transferred to the babies during pregnancy. 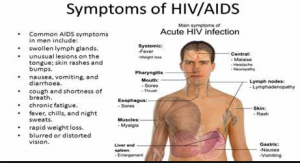 Researchers suggest that early symptoms can be detected after three to four weeks of exposure, but mostly it could not happen, and HIV grows inside up to 10 months quietly. In most of the cases, it is neglected in the confusion of any mild or seasonal illness.
HIV symptoms in men include painful ulcers on the genital area, especially on the penis, a characteristic of HIV. When the flu and fever stay longer it turns into swelling and pain, sufferer feels pain in lymphatic nodes in armpits etc.

Rashes following fever are the second alerting symptom of HIV. HIV symptoms in men are generally common, and they might also be seen in women.
Other HIV symptoms in men at a visible stage can be noticed interfering with the digestive system of the patient, comprising of liver and pancreas enlargement. Because of low immunity, the HIV positive men are more prone to cancerous infection of male organs, like prostate cancer etc.

HIV intervenes with our blood and immune system, so steadily it corrupts all the structure of the body. The problem of dry coughing is directly linked to HIV contamination.
HIV reaches the body fluid and exists in male semen. Genital herpes, Gonorrhea, Chlamydia, and genital warts are some prominent HIV symptoms in men at a higher stage.

Early symptoms of HIV in women are identical, but in the advanced stage, it might be slightly different affecting the reproductive system of females. The leading HIV symptoms in women include vaginal discharge and vaginal yeast infections, after which there is a high probability of catching bacterial vaginosis and trichomoniasis. Other HIV symptoms in women comprise of irregularities with the menstrual cycle, and disturbance with reproductive organ. HIV infected women are prone to pelvic inflammatory disease and human papillomavirus (HPV), a main cause of genital warts.

A friend had real problems with kidney stones. At times the pain stood him straight up and was severe. He had stones before and knew what this was. He took this flush once and said the severe pains were gone, but that he still had some discomfort. He took it again a week later and […]

We, women, hold the power of the world in our dishwashing pan hands. I came to this conclusion from years of marriage and motherhood. My family would spend their days searching for all their belongings, walking around lost in their dirty underwear if not for me. Not one dentist appointment would be kept….no dry cleaning […]

Snoring Problems How To Stop Snoring Naturally With Home Remedies

Cannabis products are available in the market by the name of the cbd ones. For people suffering from sleeping issues can consume cbd products too and enjoy relaxing and healthy sleep. You will see it here how the sleeping issues are caused and how they should be treated. Whatever our perceptions are of people who […]