A few years ago I tried to get my parents into being conscious of our footprint. It didn’t work, we all used the recycling as another smaller trash can, I felt bad, told everyone that recycling was for hippies, and gave up. Of course, my dad just recently got into recycling. Actually, we got into it because the people who lived in our house before we moved in left their recycling bin here. So, we started washing out containers, packaging up old newspapers and even crushing soda cans to make more space.

Now that we have the special blue bin everything seems different. The whole family is more environmentally aware. It’s great! One day we all just started really caring about our environment. No one ever taught us to be aware, I guess the fact that our planet is filling with garbage really scared us. So, does your family recycle? And how have you taught your kids about being environmentally responsible in a world that is so used to wasting? 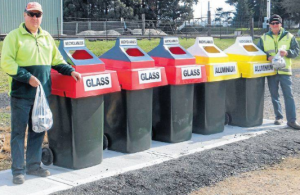 Recycling has been required by law around here for a long time – probably twenty years. So, my kids haven’t known a time when there wasn’t a separate can for tossing recyclables. It’s not something we talk about all that much, it’s just how it is.

Now and again, the school will do a lesson focused on recycling and one of the kids will come home all “gung-ho” to do more. They’ll double check the codes on the bottom of plastic containers I throw away. However, this enthusiasm doesn’t extend to taking shorter showers or bringing empty shampoo bottles downstairs to put in the recycling bin. Actually, come to think of it, they don’t even bother to take the empty shampoo bottle out of the shower, but that’s a separate issue.

I’ll admit to having been lazy about recycling certain things. Is it really worth all the water you use to clean out the peanut butter jar? But just this year, on Earth Day, I saw a segment on a morning show with a recycling specialist who said you don’t have to wash out the jars. How liberating!

Lately, I’ve been noticing more and more canvas bags at the grocery store. At first, my reaction was “what a hassle!” However, I am now starting to realize just how many little plastic bags I bring home from the various stores and I think canvas bags may be the next frontier for us in recycling. Maybe I’ll have more success with that than the shorter shower thing! 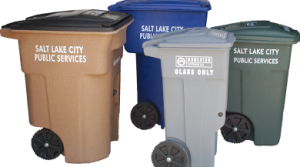 Hey, I’m in California. We invented recycling. I’m sitting here right now looking at the bags and bags of hard plastic vs. soft plastic vs. colored glass vs. shiny paper vs. blahdeblahdeblah that is part and parcel of L.A. Life in this century. And this is a good thing.

But me personally? I’m over it. Or rather, past it. We’ve recently focused the family on a different, oft-neglected part of the “recycle, reuse, reduce” mantra. I’m convinced we are simply buying too much stuff wrapped in too much other stuff, and it has to stop. If the container can’t be crumpled up into a fraction of its original size – assuming it won’t simply rot away – I say it ain’t comin’ in here. Because I’m sick to death of hauling all this crap to the recycle bins.

I’ve recently changed produce markets because my favorite place puts a lot of its soft fruits in plastic boxes. And I don’t want plastic boxes. We’ve pretty much stopped buying any prepared or frozen foods, with a few notable exceptions. (Frozen bananas and peas. Frozen peas, my friends, are a gift from God.) No more bottled water – which was already a rip-off – and juices in cartons not cans (eww! Cans!) or glass. I’m even buying rice and flour in bulk and putting it in good ol’ fashioned Mason Jars, just like Grammy use’ta. Boxes, boil-in-a-bag, and plastic wrap is so 1900’s, don’t you think?

Point is: we’re concentrating on using less, buying more wisely, and eating fresh and local whenever possible, so that recycling – as important as it is, and it is – isn’t the only thing we do to feel good about beginning green; it’s merely the first thing.

Here endeth the sermon for the day.

A “Family” Considers Teen’s Request for a Tattoo

The “Dad” The Elf – 13.666 years old (with the accent on the “666”) has just made a major-league pitch to us for a…for a…tattoo. And not just some tiny little rose on her ankle you could cover with a stocking or a sports bandage or a skin graft. This time the Elf is living […]

Rail Canada provides a carefree way to explore Canada’s countryside. Trains roll from the quaint towns of eastern Canada to the flat expanses of the Canadian prairie, through the Rockies to the Pacific Coast. History The first railway was established in Canada in 1836. VIA Rail Canada arose in 1978 following the consolidation of the […]